This will outline what thoracic outlet syndrome is, what the causes are and my approach to treatment.

Thoracic outlet syndrome is a condition in which the Brachial Plexus and the subclavian/axillary artery and vein, (a neurovascular bundle) become entrapped or compressed. This can happen in different ways:
1-At the thoracic outlet, which is the space between the clavicle and the first rib.
2-At the anterior scalenes, when the bundle is compressed between the anterior and middle scalene.
3-At the pectorals minor, when the bundle is entrapped between the pec minor and the rib cage.

Compression at any of these locations can cause symptoms anywhere along the upper extremity, most commonly the hand and fingers. Common symptoms include pain, tingling and numbness that can be mild to severe. Causes include trauma, repetitive use injury or anatomical abnormalities. 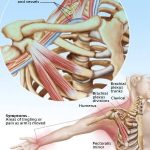 This image shows the brachial plexus (a bundle of nerves, arteries and veins) passing between the clavicle (collar bone) and the first rib. This also shows the bundle passing beneath the pectoralis minor. The pectoralis minor can be a hidden culprit in many issues involving the shoulder, including a retracted or winged scapula and tension in the rhomboids.  It can play a major role in thoracic outlet syndrome. 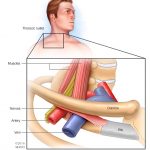 Here’s a closer look at the passage between the clavicle and the first rib. It shows how limited the space is. When nerves become compressed, the result is often pain, tingling and numbness.

I’ll explain my approach to treating a client who recently presented with these symptoms.  The client is a 38-year-old massage therapist who works 6 days a week with a heavy workload. He also goes to the gym everyday and lifts weights. My theory is that the combination of repetitive use of his shoulder in his work, and the bulk of his musculature was creating impingement. He was having constant pain, tingling and numbness from his shoulder down to his fingers. This presented bilaterally but was more prevalent on the right. It was moderate to severe on his first visit.

Primary focus: With the client in the supine position, the goal was to loosen the scalenes, subclavius, and the pectoralis major and minor. Doing so helps creates space between the scalenes as well as loosening the attachments to the clavicle and ribs 1-5. By allowing these muscles to relax, the hope is that the nerve bundle has more room through which to pass. I also worked to loosen the area between the pectoralis major and the deltoid. Then, with arm over head, I worked on the triceps attachment as well as the attachments of the latiissimus dorsi and the subscapularis muscles.

Secondary Focus: With the client in the prone position, my intention was to release the entire shoulder complex.  First I released the supraspinatus and infraspinatus muscles, the teres major and minor, and mobilized the scapula to help free it from the intercostals.  The rhomboids were also lengthened to allow the scapula to further release.

The client reported tremendous improvement after the first visit and claimed that he was able to work pain free for the first time in months. I saw him for two additional visits and he reported continued improvement, with diminished tingling, numbness and pain.

This common condition affects many people. I invite anyone who may be experiencing similar symptoms to contact me and make an appointment. You can do so through my website: jdonohie.com.